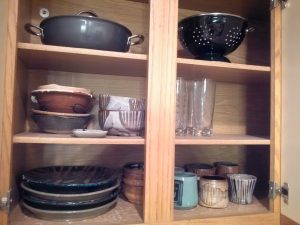 Soon rabbit they’ll be updates on the set up of the studio and the start of new work.  But for now, literally everything has been boxed up and awaiting the sale of one home and purchase of another.  I’m amazed at how much has been accumulated and how much is left out for just the getting by 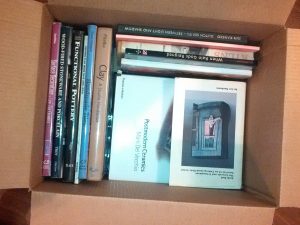 There is part of me that feels like I am Gollum sitting on a high throne of all my precious (shoes, pots, books, art) neatly packed and waiting its new home.  There is another part that feels like a hoarder; because there is the stuff I use, the stuff I sometimes use and then the stuff I might someday want or need or just can’t let go even though it’s been in a box for more years than I care to acknowledge and it will either stay there until I am gone and its someone elses job to deal with or until I act.  There is also the stuff that we’ll no longer need but are taking with us, until we are settled and figure out what goes and what stays, ending in a cathartic purge.

Regardless, all the packing and disseminating reminded me of this poem, which is actually much more despondent and depressive in its subject matter than our move, but none the less

All My Pretty Ones
Father, this year’s jinx rides us apart
where you followed our mother to her cold slumber;
a second shock boiling its stone to your heart,
leaving me here to shuffle and disencumber
you from the residence you could not afford:
a gold key, your half of a woolen mill,
twenty suits from Dunne’s, an English Ford,
the love and legal verbiage of another will,
boxes of pictures of people I do not know.
I touch their cardboard faces. They must go.

But the eyes, as thick as wood in this album,
hold me. I stop here, where a small boy
waits in a ruffled dress for someone to come…
for this soldier who holds his bugle like a toy
or for this velvet lady who cannot smile.
Is this your father’s father, this Commodore
in a mailman suit? My father, time meanwhile
has made it unimportant who you are looking for.
I’ll never know what these faces are all about.
I lock them into their book and throw them out.

This is the yellow scrapbook that you began
the year I was born; as crackling now and wrinkly
as tobacco leaves: clippings where Hoover outran
the Democrats, wiggling his dry finger at me
and Prohibition; news where the Hindenburg went
down and recent years where you went flush
on war. This year, solvent but sick, you meant
to marry that pretty widow in a one-month rush.
But before you had that second chance, I cried
on your fat shoulder. Three days later you died.

These are the snapshots of marriage, stopped in places.
Side by side at the rail toward Nassau now;
here, with the winner’s cup at the speedboat races,
here, in tails at the Cotillion, you take a bow,

here, by our kennel of dogs with their pink eyes,
running like show-bred pigs in their chain-link pen;
here, at the horseshow where my sister wins a prize;
Now I fold you down, my drunkard, my navigator,
my first lost keeper, to love or look at later.

I hold a five-year diary that my mother kept
for three years, telling all she does not say
of your alcoholic tendency. You overslept,
she writes. My God, father, each Christmas Day
with your blood, will I drink down your glass
of wine? The diary of your hurly-burly years
goes to my shelf to wait for my age to pass.
Only in this hoarded span will love persevere.
Whether you are pretty or not, I outlive you,
bend down my strange face to yours and forgive you.
Anne Sexton

And for all the whining about possessions, which ultimately come and go, it was harder to pack away the studio and take a break.   I’m looking forward to having a studio, not just a workspace in the garage and getting back to work.  The songs the songs are a calling.