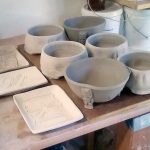 Last week I had the absolute pleasure of taking 20 hours of my vacation time and spending it doing nothing more than working in and on the studio.  In some sense it might of been one of my more selfish moves, on the other it was a non guilty pleasure that i cherished because it afforded me time to just work with nothing in my way. Until this I’d been getting into the studio at least twice a week for an hour or three, but it left me feeling like I had just scratched the surface production wise and with that self doubt circling trying to focus and devote time to new forms and building muscle memory for those new forms was out of the question.  So every morning last week I woke, coffee’d and headed to the studio to work until it was time for a shower, food and to head to the office. 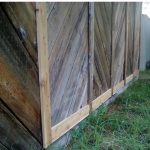 Besides just working i had a couple of repairs that needed attending to.  First up was replacing the air compressor pressure switch, which had a cracked coupling and made it impossible to sandblast. (which made it impossible to get any sculptures finished) Second was the completion of studio tlc, which has weathered a storm or four, so after the initial powerwashing and coat of thompsons, I made note of a few timbers that needed repair and of course the addition of cedar trim at the bottom, because it just looks better. 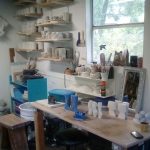 After a short work day on Friday (devoted to finishing up the new mugs) I did a cinderella hustle (aka cleaning) and tested out the sandblaster to ensure its back up and running.

So having built up enough stock to cure the ‘never enough’ insecurity that was hounding me its all systems ago its time to get stuff fired, shot and of course back in the studio to make more work.