one of my fb friends posed the question ‘ if you were stuck on a desert island and could only listen to one band for the rest of your days what would it be’ while it was interesting to read the choices of others,  i myself chose talking heads, which then caused me to put them back in heavy rotation in the various devices.

I’ve hit replay more than a few times since on, houses in motion,  and have narrowed down a couple lines that i find most intriguing for what i want, then its been playing with punctuation, line breaks as well as the lyrical movement. not quite a haiku or tanka but close.

never get to say much

never get to talk

tell us a little bit but not too much.

the next step is to figure out what to do with them, i’ve been sketching but so far nothing has clicked, i’ve also got a trifecta in the studio that has been staring at me for a while waiting. waiting and it might just be that some sandblasting can make that happen, its the pesky middle piece where i want to not only focus but tie the other two together and apart at the same time.
besides talking heads, i’ve been playing with some fleetwood mac and trying to work out a little something referencing dreams

and in the respite of dry, humid weather we’ve been having i managed to get some work sandblasted and shot. 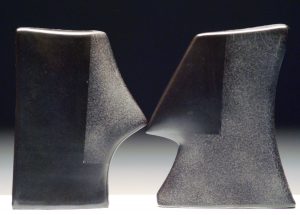 well here i go again you’ve heard it all before